What’s your burning platform? What niggling thing is keeping you up at night? Ours was the name. If we hadn’t moved forward and made a change, the people of Bristol would have made us act, one way or another, as they did with the Colston statue.

Bristol Beacon is the southwest’s largest concert hall, programming a mix of music from classical, jazz and world to folk, rock and pop, alongside community events and festivals. Until September 2020, the 150-year-old venue was known as Colston Hall, named after a 17th-century figure Edward Colston.

In the past, Colston had been renowned for his works of philanthropy, supporting schools and local businesses with a fortune earned as a slave trader. Gradually, his name on Bristol’s leading concert hall moved from an unremarkable choice – one shared by schools and street names throughout the city – to something potentially problematic, and a flashpoint for wider social injustices and political disagreements.

How we treat problematic figures honoured in the past, and what that says about society now, remains a burning issue. As historian David Olusoga comments, “the memory of Colston has become the frontline in the battle for Bristol’s historical soul”.

About this case study

As part of a webinar organised by Clore Leadership, Sarah Robertson (Communications and Special Projects Director) described how she and her team dealt with the challenging debate surrounding the neglected histories playing out at her venue. She highlights the leadership learning points as she dealt with issues that she initially felt unqualified to tackle. You can watch the original webinar here.

‘The Burning Platform’ – When Doing Nothing is No Longer an Option

“We felt out of our depth and overwhelmed. We weren’t academics or historians and didn’t feel like we fully understood the history of the Trans-Atlantic slave trade in Bristol. Yet we were bearing the issue and the narrative for the city.”

By the mid-2010s, Colston Hall was facing regular protests outside its premises and national newspapers were covering the venue not for the programming on its stages, but because of the name on its frontage. Meanwhile, inside the organisation, a valued African-Caribbean member of staff said that her family wouldn’t come to the hall, despite it being her place of work, because of the Colston name.

Gradually, the concert hall team realised that ignoring the issue was not an option: in keeping the name it was telling communities of colour that their feelings didn’t matter, and perpetuating structural racism. It was also holding itself back from making new connections because it was frightened of change. Sarah ultimately concluded that, despite her trepidation, they had a duty to ‘stop hand-wringing and get on and deal with it’.

Facing Public Hostility – Getting Past Defensiveness to Find the Positives

In 2017, the hall announced its plan to change the name – and in doing so faced a barrage of negative press, letters and tweets saying that the choice was wrong. It was a lonely experience: the venue was ahead of the curve.and other organisations facing similar issues stepped back, leaving the concert hall to deal with the fallout.

She adds that in retrospect, the communications from the period sound defensive – more focused on looking inward on the weight of the issue for the organisation than outward to its audiences.

The road towards seeing the change more positively came slowly, but as the group realised that the high stakes could be a source of excitement: a chance to make a genuinely meaningful change which would mean that the next generation would be further along the road to inclusivity. The choice would also free up the organisation to greater openness, opportunity, honesty and joy, as is fitting to a live music venue. 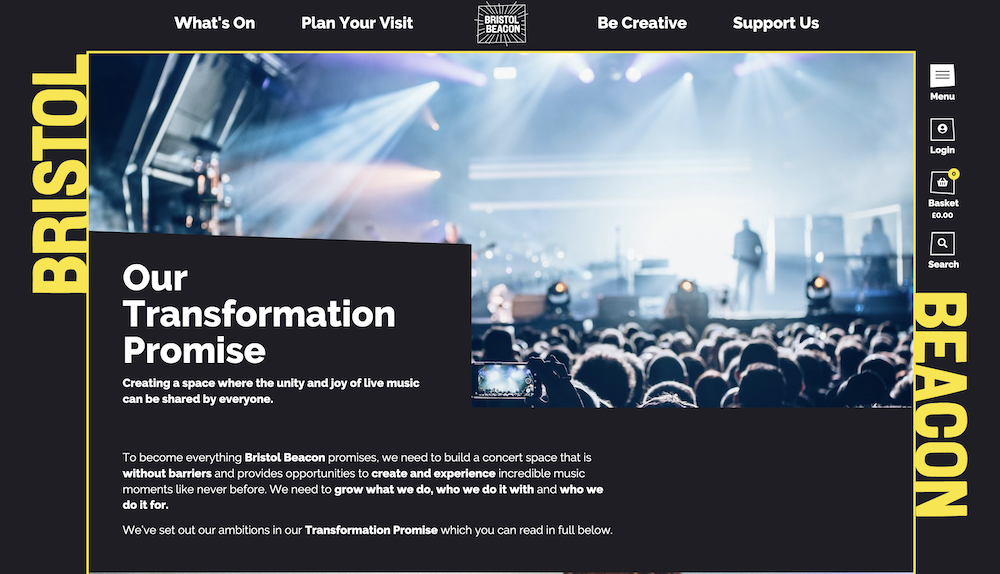 More Than a Cosmetic Change

The concert hall didn’t just want the cosmetic change of a new name but instead aimed to deal with the wider structural injustices fuelling the issue – inequalities that were also apparent within the venue itself, from the programme it offered, to the staff delivering it.

The group spent a lot of time thinking about its values, resulting in a group of documents entitled Our Transformation Promise, which now underpins its business plan. Important factors include:

• More ambitious targets for the diversity of the workforce

• A wider range of artists on its stages

• A request to audiences to hold the venue to account, and a promise of regular updates so that everyone could see progress. 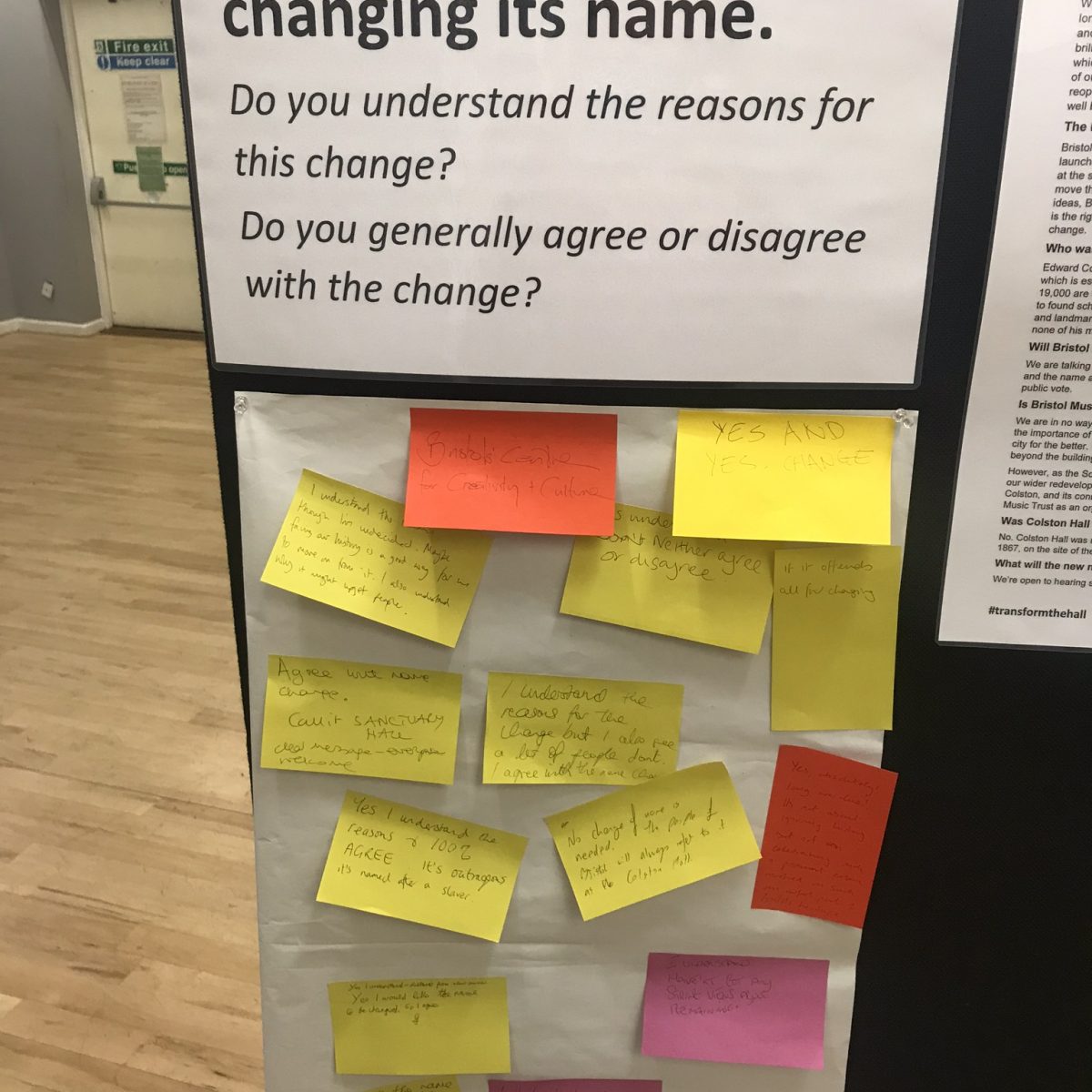 Nevertheless, the venue had a sometimes rocky road ahead, during a consultation process that lasted for almost three years, until the new name of Bristol Beacon was announced in September 2020.

• Although the majority of funders supported the venue, there was reticence from some individual givers, many of whom did not see the need for change.

• Plenty of people also claimed on social media that they would not come to shows again, or donate.

• There were live community consultations, where the venue invited people to hear about the name change and the reasons behind it. These could be volatile, with angry members of the public shouting at staff. Sarah comments that this was often less to do with Colston’s name itself, as wider social divisions, with people taking a side based on the culture wars, Brexit and similar contentious issues. Keeping or leaving behind the slave trader’s name was a flashpoint for wider politics.

Although the venue chose to push against socially conservative opinions and stick with its values, it used its 150th anniversary to affirm what has not changed. It collected many of the positive memories that people associated with the hall since its opening in 1867, and in doing so underlined that these would not in any sense be taken away or negated.

Colston Falls – Once Ahead, Now Behind the Curve?

When activists pulled down the statue of Edward Colston in central Bristol in June 2020 it caused a switch in public sentiment. The voices to the fore were now not those opposing change, but those of a wider public asking why the name of the Hall had not been changed long ago. Sarah says that they had aimed for a very thorough public consultation, and achieved it – but in retrospect, the venue might have moved faster and changed its name more rapidly.

In these situations, it is useful to remember that the criticism you are receiving on a single day or week will quickly be forgotten – as long as you have an overall direction of travel, and stick with it, rather than excessively seeking to appease whoever has complained last.

Finally, the day came to announce the concert hall’s new name: Bristol Beacon. Taking place against the backdrop of the pandemic, communications staff had to return from furlough to organise the event, which took place online – Bristol Beacon’s first livestreamed press conference.

One aspect of this event underlined the successful journey Bristol Beacon had made from an embattled and problematic venue, to a place freed to represent everyone in the city. It had specially commissioned a poem by Bristol City Poet Vanessa Kisuule, and needed people to read a line each to create a short celebratory film.

Sarah feared that many stakeholders would be wary of being associated with the organisation given its recent past –but in fact, everyone who was approached accepted 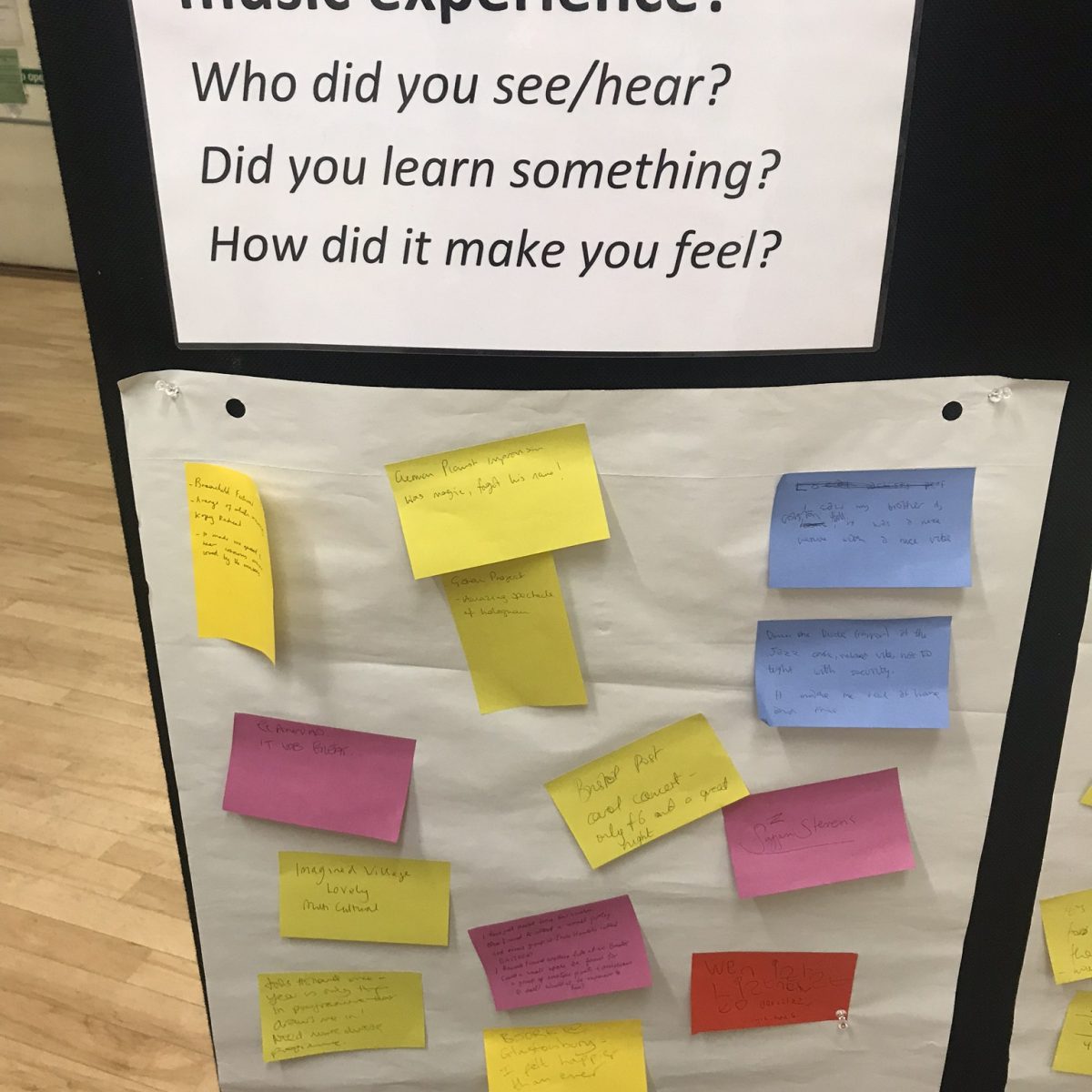 Tips for leadership through change and challenge

“What’s your burning platform? What niggling thing is keeping you up at night? Ours was the name, and if we hadn’t moved forward and made change, the people of Bristol would have made us act, one way or another, as they did with the Colston statue”

What did the Bristol Beacon team and its leaders learn from this experience? Sarah offers some tips:

• Start from your values, and allow these to shape your strategy – and help you to stick with your more difficult choices – whether public opinion is against you, or swings round in your favour. These values will mean that you are not constantly capitulating to the most amplified voices at any particular moment.

• Find a positive story for your team and your stakeholders. What will the world look like when you have achieved a big change, what will it free you up to do? Then think about how you will feel if you carry on as usual. 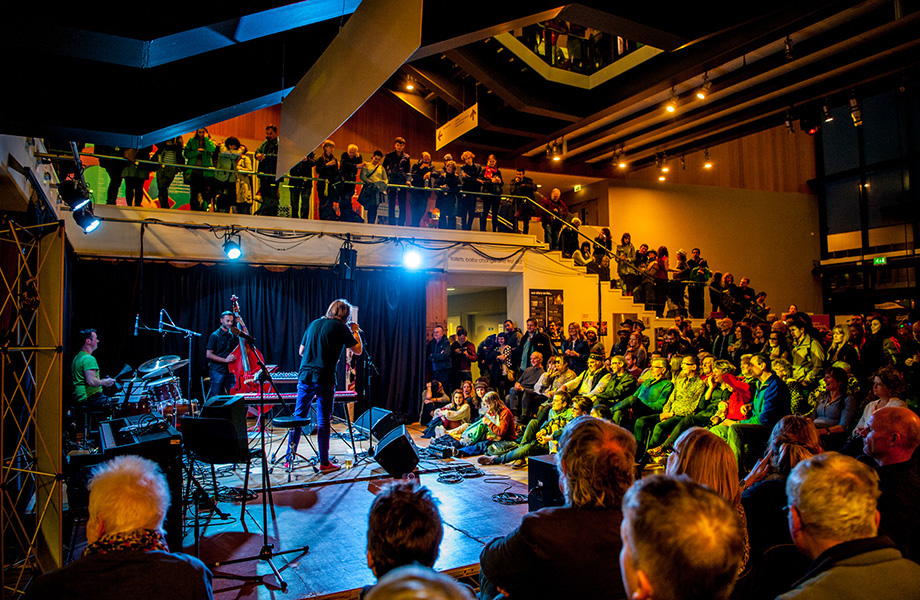 • Change your own mindset, so the change is a positive path, not a mountain to overcome. adrienne maree brown’s book ‘Emergent Strategy’ is very good on change, activism and personal resilience. She argues that we need to practice increasing our ease with change, and one way to do that is to embrace pleasure, which she calls ‘pleasure activism’.

• Most of us want to be fulfilled and make a difference and put in place a brighter future for the next generation. See change and challenge as the part you are privileged to play in this.

• Finally, remember that nothing needs to be forever – moments of change can also be a time of action learning – trying things out, embedding good ideas and quickly discarding less successful experiments.

Sarah concludes that for Bristol Beacon “our vision of unity and joy through live music is now lived across the whole of the organisation. Making these changes has set us free to be our best.”

This article was written by Kate Smith of Goosegrass Culture.

Follow the links below for a detailed case study from each speaker – or watch the original webinar here. 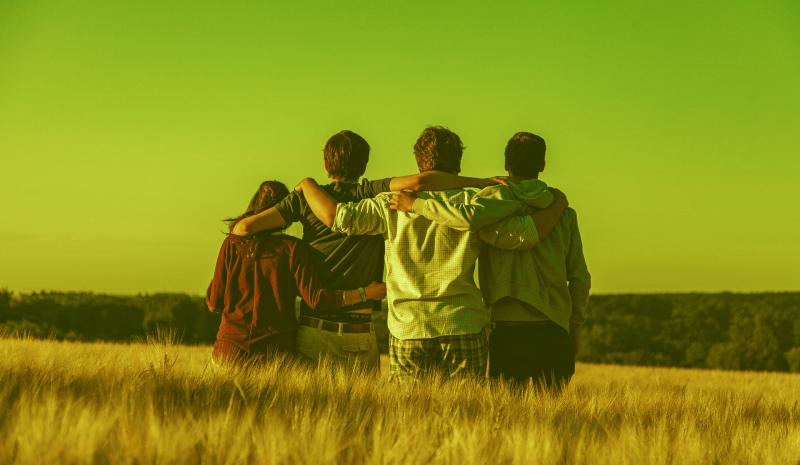 How the YHA survived a pandemic-driven challenge to its business model in its 90th year, created a flexible business model and refocused to make sure it was serving its core audiences. 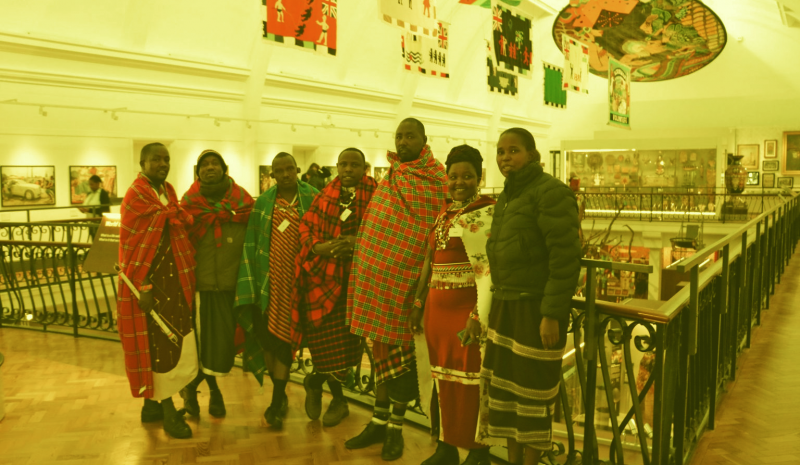 This case study describes how a new project involving international community co-creation in African collections was overtaken by the pandemic, but nevertheless found a route to success. 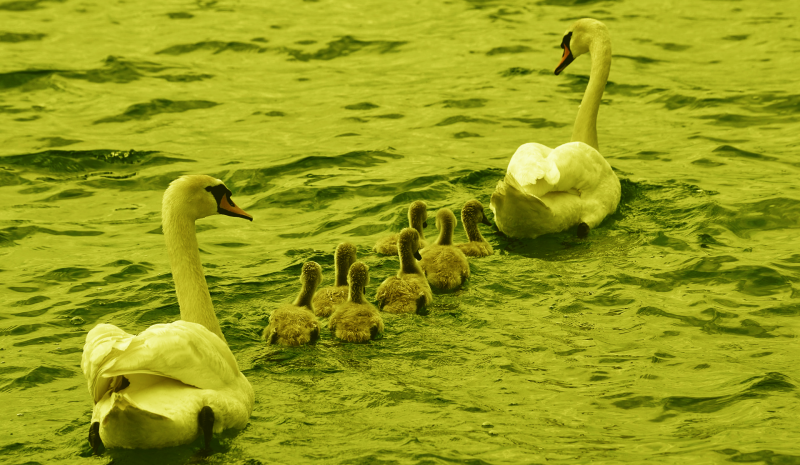 Values are our anchor in choppy waters and help us make difficult decisions. These three stories of leadership describe how cultural organisations of very different sizes navigated change.